Role of Social Enterprises (SEs) in creating resilience at local levels: The case of Indonesia and its application to an Australian context

In the era of climate change and increasing natural disasters, the aim of most studies is reaching less vulnerable societies with more adaptation capacities (Coulthard, 2012). To increase the adaptation capacity of a society, role of technology has been elaborated (Smith & Stirling, 2010). In addition to technology, the right set of policies is another tool to aid local communities. However, while technology and policies have the ability to tackle vulnerability at local levels, social sustainability and enhanced social resilience (Davidson, 2010) are key factors in increasing the well-being of a community specially in case of the post-disaster traumas. To date, the role of local community and their leaders as change agents in establishing successful social enterprises is neglected.

At a recent visit to some of the social initiatives in Indonesian rural areas, organised by the United Nations University Institute of Advanced Studies (UNU-IAS) and Gadjah Mada University (UGM), I learnt about Serut village social initiative. Serut village, Palbapang, is located in Bantul sub-district. The sub-district is heavily populated with the mixture of rural and urban developments. The main land use is agriculture (rice and plantations). The village’s population is 1,380 people, including 425 families. 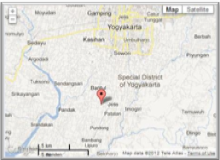 This sub-district is one of the most earthquake prone areas in Indonesia (Aswandono, 2009). It was hit by the May 2006 earthquake. More than 4,100 people died in Bantul area as a result of this natural disaster (Resosudarmo, Sugiyanto, & Kuncoro, 2008).

The local community managed to recover their economy and social sustainability as a result of a strong sense of community and an active change agent role. Sense of togetherness, moving from being individual to become integrated is an important element in coping with the recent earthquake devastations. All elements of society have cooperated in the rehabilitation process of the village (e.g. NGOs, Universities, Government). This assisted them in retrieving the economy and society, working under UN millennium framework. An active change agent role, advocating change and vitalising the local community after the 2006 natural disaster has been essential for the success of the restoration process. The leaders concern for their society led to empowerment of local people through growing food at homes. 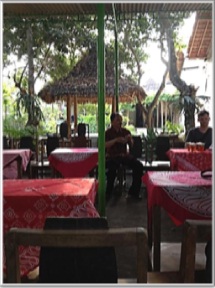 Figure 2: The community leader in Serut

Serut has become a successful example both at national and international levels. They managed to build more earthquake resistant housing, enhanced their health and education system, become more ecologically aware and started some pro-environmental initiatives. They also learnt that disasters will happen again and they need to be ready. As a result all of the houses have appropriate ambulance access. Neighbourhood associations and the specific resource people are active in the village.

Application for the Australian context

The concept of social enterprises and lessons learnt from the Indonesian case (Serut village) can be applied to the Australian context. Although the socio-cultural and economic settings are quite different, human characteristics are the same everywhere (Lévi-Strauss, 1966). Landholders’ participation in the social enterprises has the ability to provide them with the opportunity to meet the greenhouse gas emission abatement, conserve biodiversity and increase their resilience in rural areas.

Agricultural activities such as cattle farming, crops and land use alteration contributed about 23 per cent to Australia’s net greenhouse gas emissions in 2009 (Sparkes et al., 2011). Sixty per cent  of Australia is privately owned and managed, as a result the sustainability of landscape management depends on the landholders’ practices on their private properties (Australian Government Land and Coasts, 2011). Empowerment of the landholders within a social enterprise framework supports them to take action to tackle climate change and become change makers.

In addition, the recent passage of the Carbon Farming Initiative (CFI) (Australian Government, 2011) has the potential to produce greater synergy between carbon farming and biodiversity management. However, landholders’ attitudes alongside with setting up expenses, water and seedling availability and alternative land use options will potentially affect the success of these projects (Sabto & Porteous, 2011). Social enterprises which consolidate some of the costs and make local communities consider themselves as change agents will play a key role in success of the recent initiatives introduced by government.

The application of social enterprises in carbon planting schemes especially in rural areas where landholders own smaller land parcels can lead to the success of such initiatives. The main issue to consider is how social enterprises can connect landholders and build an effective scheme based on the community connection and achieving the social, ecological and economic sustainability. In addition to the financial values that planting trees deliver, the strong community feeling will assist the rural areas that experience extreme events as a result of climate change. The opportunity for both social consequences and ecological outcomes assists landholders to build climate change resilience within the rural areas. This has been identified as a priority to support rural communities and preserve ‘natural capital’ (Department of Agriculture, Fisheries and Forestry, 2007; Department of Primary Industries, 2011).

Coulthard, S. (2012). Can We Be Both Resilient and Well, and What Choices Do People Have? Incorporating Agency into the Resilience Debate from a Fisheries Perspective. Ecology and Society, 17(1), 4. Retrieved from http://www.ecologyandsociety.org/vol17/iss1/art4/ES-2011-4483.pdf

Resosudarmo, B. P., Sugiyanto, C., & Kuncoro, A. (2008). Livelihood Recovery after Natural Disasters and the Role of Aid: The Case of the 2006 Yogyakarta Earthquake. Canberra.