The project delves into the role of cities’ climate actions and mitigation and adaptation strategies, to tackle global climate change from scientific and practice perspectives. It evaluates the existing climate actions in selected Asian and Pacific cities through climate risks in cities, GHG reduction targets and adaptation measures being taken. The project looked into individual cities namely, Melbourne, Bangkok, Hatyai, New Delhi and Yogyakarta. The study underpins the necessity of a common framework to track cities’ climate actions based on indicator-based tracking mechanisms. These must be formulated and selected carefully, as they will vary according to the context and the nature of mitigation and climate hazards, as well as the development process and goals in different cities. Crucial elements to any framework or indicators include: articulation of climate change goals and objectives, sectoral inclusiveness, complete representation and characterisation of interventions, in-boundary and out-boundary linkages, administration and institutional changes designed to facilitate mitigation and adaptation (e.g. processes associated with capacity building), and the evaluation of whether development outcomes (e.g. increased productivity, reduced disaster losses, etc.) have improved. The study proposes an overarching framework for climate compatible development that includes tracking climate actions’ progresses as crucial component of cities’ climate action.

As most of the cities in Asia are vulnerable to the exposure of climate risks, and much of the climate actions, mainly adaptation strategies, are still in a developing phase, developing a common framework to track mitigation and adaptation, while most importantly ensuring the adoption of them by the concerned authorities in preparing climate action plans is essential.

Dr. Shobhakar Dhakal, Head and Associate Professor of Department of Energy, Environment and Climate Change, at the Asian Institute of Technology, summarised his experiences of working in this project as follows: “Following the Paris Agreement coming into force as well as with evidences from increasing scientific knowledge regarding cities and climate change, the onus of climate actions have shifted towards cities, and the roles of climate actions at the city level are increasingly recognised. Different city sectors are often viewed as silos, however, a comprehensive understanding of feedbacks between mitigation, adaptation, and resilience is necessary for climate compatible development which emits less GHGs/mitigates more emissions, enhances carbon sinks, builds resilience by reducing vulnerability and adapting to the impacts of climate change, and reduces mitigation burdens outside of the city boundaries. Tools to track such development pathways are essential for moving forward.” 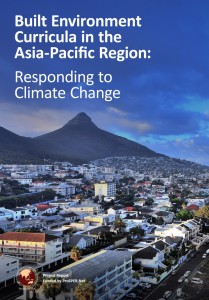 A detailed report and its conclusion can be found here.