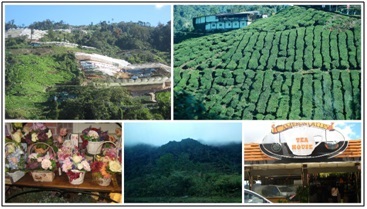 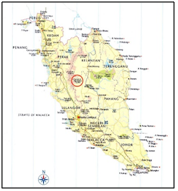 An exotic hill station in Malaysia, Cameron Highlands is located in northwestern part of the state of Pahang (about 290 kilometres from Kuala Lumpur or 90 kilometers from Ipoh, the capital of Perak), with its boundaries stretching from Kelatan in the North to Perak in the West (Figure 1). The geography of the highlands is characterized by tropical rainforest serving as a habitat for several rare species of flora and fauna. Tropical rainforests are some of the oldest, biologically diverse and most productive types of forests in the world. The soil binding feature of Highland forests in particular is unique and helps to prevent landslides and floods in low lying areas. The forest also contributes to resisting microclimate changes in the highlands, due to climate extremes. Apart from the rainforest, Cameron Highlands is also known for its Tea Estate, farmlands, nurseries and orchards (Figure 2). The area is situated 1,200 metres above sea-level with temperatures ranging from 16oC to 22oC. Peninsular Malaysia depends largely on the water supply from these highland forests, which in turn supports a number of waterfalls. The cloud stripping effect of these provides plenty of rain and fresh, clean water to its population comprising of Malay, Chinese, Indian and other ethnicities. Their livelihood depends mainly on the tea estate, the farmlands (strawberry farms, butterfly farms, and apiculture), the orchards, and general vegetable farming.

The beautiful hill station is experiencing a development boom due to the suitable climate it currently holds for agriculture, matching the government’s commitment to raise food production and security in the country. Cameron Highlands meet 40% of today’s need for vegetables in Malaysia and also exports part of its production to neighboring countries, such as Singapore. The incentives for agriculture increased in parallel to unequal prosperity, economic development and environmental degradation. Aiming to enhance the living standards of the rural population, green valleys are being replaced by multi-storied commercial buildings and pitched roads. In the midst of all this, cultural values are getting lost, enterprises are taking over household farming that employ high yield variety seeds and chemical fertilizers to enhance farming throughout the year. Villagers are changing their traditional bamboo houses to concrete houses with television (Figure 3(a)), refrigerators, two or four wheelers for transportation instead of the traditional travel mode. With this transition from rural to urban life, deep cultural values are being lost in the Cameron villages.

Modern life certainly brings benefits, but the introduction of electronic goods such as mobile phones, television and commodities for example packaged food, bottled water and drinks, shampoo and others have increased the per capita waste generation. The lack of information about sustainable waste management practices results in environmental degradation through waste accumulation and pollution. These changes are accompanied by a related loss of traditional ways of living, farming, production of handicrafts and hunting. All these combined lead to loss of soil fertility, either because of pollution or extensive cropping, loosening of mountain soil triggering landslides, and deforestation resulting in less water storage and less rain (Figure 3(b)). It can be concluded that development can indeed be a good thing, but without providing ways to preserve local cultural heritage, native species and natural habitat, the rural structure and way of life that originally conserved a ‘Functioning Ecosystem’ not only for the highlands but also for low-lying areas, are destroyed, affecting far more communities than expected. 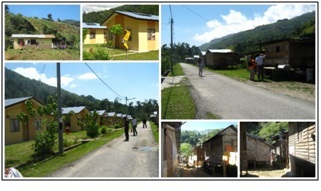 Figure 3 (a): Types of houses showing the change in Cameron 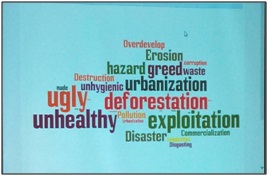 Development in rural Cameron is a challenge for local and national governments. This is due to the lack of an effective linkage between various stakeholders, that in a rural scenario would include the local and national governments, community leaders, villagers, the private sector as well as industrial partners, and non-governmental organizations (NGOs). All these stakeholders play an important role in local development, but often act in isolation and pursue conflicting goals. In this scenario, effective and coherent decision making is usually a challenge (Figure 4). For instance, government and private groups plan development schemes for economic security but as these plans do not reflect the real needs of the community, there is a general sense of rejection and challenges in implementation. Similarly, NGOs look into cultural and environmental security and misses the economic factor that could support and sustain development. The result is disconnected development schemes that prove to be unsustainable over time.

As sustainable development requires economic, cultural, social and environmental development that is socially accepted and technologically feasible from a long term perspective, it cannot be achieved with stakeholders performing fragmented and disconnected functions. A holistic approach and inclusive practices to consider all stakeholders’ voices, including local people, are vital for successful interventions. In the case of the Cameron Highlands, businesses flourished in the area and migrant workers had found a steady income. However, we identified there was no connection between economic development and emotional and cultural mindset of indigenous people who always lived in the region and had been relocated from their traditional land to facilitate agricultural development and raise the land’s revenue. In some cases, due to construction of tall buildings, these communities had to forcefully leave their land as the construction triggered landslides as happened with the Semai community in Songaikabok and Kampung Lerya. With modern housing schemes and increasing employment in tourism, the preservation of local traditions and culture of housing and occupation in farming and handicrafts was being lost.

Currently, farmers in the Cameron Highlands work under pressure to increase yields while limiting costs and coping with unstable vegetable prices. The use of excessive fertilizers, pesticides and other chemicals results in loss of soil fertility and loss of habitable land due to encroachment of fragile land (Figure 5). Also the lack of proper information had lead to severe sanitation issues contributing to  the degradation. For instance, the use of chlorine treatment for disinfection without proper knowledge of residual chlorine, results in increased health risks as it is reactive to organic compounds in water. Moreover, uncontrolled use of agrochemicals results in soil and water pollution through surface runoff – eutrophication in the catchment area in the Sungai Tirla river which is the main source of drinking water for the Cameron Highlands. 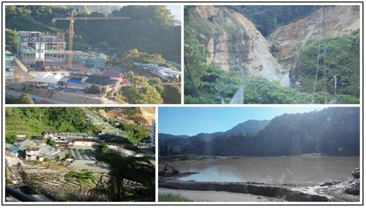 Several laws have been enacted to protect the highland ecosystem like the Land Conservation Act (1960) for the conservation of hill land and the protection of soil from erosion and silt inroad. But their non-compliance led to the northern gateway of the Cameron Highlands known as Kampung Raja to attain its eroded form. In addition, other laws and policies such as the Designated Development Area (DDA), National Land Code, River Enactment, Temporary Occupation Licence, Local Development Planning proposes important concepts, although the rules could be more prescriptive. Also, Environmental Impact Assessment (EIA) must be made mandatory before every construction and demolition activity to secure effective environmental protection with socio-economic feasibility of the work contributing towards sustainable development. As far as we were able to verify, there is only one EIA submitted for one hydroelectric power project, which could have even been replicated for other activities. EIA helps in environmental protection and social acceptance of projects through appropriate selection and optimum use of technologies/ methodologies assessing viability and feasibility of the proposed activities. And such assessment can be strengthened by the use of a monitoring tool like Geographical Information System (GIS) through modelling and simulation. These will allow mutualism between socio-economic and environment in evolving from pure traditional to scientific approach based livelihood. For example, promoting and conserving traditional land use with capacity building for enhanced farming or market incentives to cover losses.

In this sense, innovative economic instruments such as subsidies, incentives, taxes and privatisation can prove helpful in motivating local people to actively participate in developmental activities with socio-economic, cultural, pshychological, and environmental security. Further, the public-private partnership can enhance capacity buiding, strengthen knowledge transfer and optimize infrastructural deliveries which can lead to durability of developmental activities with technology acceptance across environmental and social diversity. Also, sustainbale development would not only uplift socio-economic strata of local people but lush green valley along with appropriate technology penetration which can further fortify tourism, environmental protection and prevention from natural calamities, therefore conserving the natural habitat. Thus, through these approaches, development actions can lead to sustainability with equity in generation and ecology, by optimization and conservation, through technologic interference with social and economic acceptability.

Therefore, government, policy makers, NGOs and private groups, indigenous people and local leaders need to pursue common efforts through joint venture. This could be implemented through increased community participation and public-private partnership. This can also include support from universities and research institutions, so that wide stakeholders network can contribute and share responsibilities for sustainable rural development in the Cameron Highlands and beyond.

Leadership and the way forward

Leadership presupposes a cultural and emotional connection to ignite common interests of team members, such as businesses, a village, even a whole country, encouraging all of them to play their roles in a complementary way. Leadership style can be explained in two major forms, namely transformational and transactional. Transformational leadership offers a vision for the organization where leaders widen their scope to raise employees’ interests to make them more aware and inspire them towards common interest of the group. Here, individual problems are considered raising the aspiration to identify the problem and to build up confidence to find  a solution. In transactional leadership, leaders recognize the needs of their followers/employees, defining relevant exchange processes to satisfy these needs and the leader’s expectation. Further, the transactional style involves incentives influencing the motivation of its followers, enforces rules to prevent mistakes and actively monitors the employees’ performance to avoid problems. The management waits for problems to occur to take remedial actions based on the leader-follower transaction results. Therefore, a challenge to effective leadership is the lack of connectivism in binding people and delivering resources to fulfill the needs. Because of that, a combination of transactional and transformational leadership is required to strengthen connectivism.

In addition, utilizing transdisciplinary knowledge to minimize risks may help to accommodate different views and solve complications while improving synergies, especially regarding the stakeholders’ participation. Sustainability requires greater trust, transparency and cross-functional collaborations within and between organizations. This certainly includes sharing the roles and responsibilities among ministries, policy makers, and facilitators like self-help groups, the private sector and communities.

While the Cameron Highlands may appear to have several problems, there are successful stories and many lessons learnt that can help in designing a sustainable future. For example, the establishment of a tea garden in 1933 in Kuala Terla has provided the Cameron Highlands with a source of employment in and around Cameron and has shown huge acceptance and sustainability. Other examples include changes in land use pattern in 1970 with planned agricultural and infrastructural development like livestock farming, housing projects, power plants, and other. A research center was also developed in 1971 to ensure the quality of vegetables, tea, and fruits grown and subject to marketing from the Highland as a feedback mechanism to facilitate continuous improvement. Thus, these sequencial developmental activities brought social, cultural and psychological revolution with their technologic, economic and operational acceptability along with environmental sensitization. But the random and unsystematic developmental activities undertaken in  Cameron has lead to habitat loss, deforestation, soil erosion, landslides, both surface and ground water pollution, and rising solid waste.

Understanding the past will help to predict the future, and past-present scenarios may be used as a blueprint for the times ahead, considering that the future is not necessarily a true reflection of the past but a road map to move ahead. As a tool for foresight, trio of creativity-evidence-interaction must be taken into account. Nevertheless, participation and networking must always be included, as they serve as key pillars for a firm base to jointly build a more sustainable future. A paradigm shift from short-term goals to long-term gains is a challenge to be engrained among current leaders in Cameron Highlands.